Another Day Hoping To See Bowie

Today is 9-11… always a sad day in remembrance of those who lost their lives to the terrorist attack in 2001.   It’s a hard day for many of us, so many memories of that day and the months that followed all come back.   I went to the zoo again, and watching the babies and other animals helps to make you forget everything else.    Again, I was hoping to see Bowie, but he is still bonding with Bluebonnet.  The plaque on the wall says that they call her Bonnie, but I only hear people refer to her as Bluebonnet.  On Friday I asked Kami (the information specialist), who Bowie’s father was, it wasn’t listed on the Baby announcement the way it was for Belle (her father is Groucho, who is now on loan to another zoo).  Kami said they were doing genetic  testing to see who the father is, but they know for a fact that it is not Groucho.    I guess it is either Colonel (the two-tusked elephant) or Casey (the one-tusked elephant).  I asked Kami why Casey only had one tusk, they don’t really know, that’s the way he came to the zoo.   It seems that elephants are righty and lefty tusked, the way we are with our hands and he seems to do just fine with his one tusk.      Casey was having a lot of fun in the pool today… it looked as if he was smiling, I don’t know if elephants smile, but they sometimes look as if they are very happy.  I took more photos of Casey today than I did of Belle and Rasha.  Belle was staying close to mom the whole time I was there and not venturing out from her side. 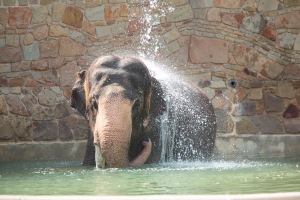 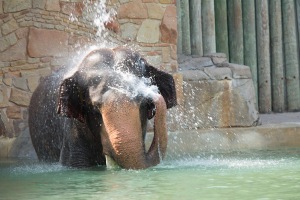 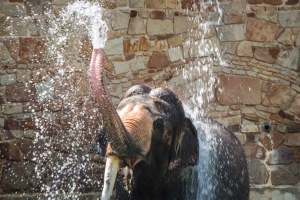 Babies At The Zoo, Fort Worth Zoo
Asian Elephant, elephant, nature, One Horned Rhino, photography, things to do in Fort Worth, wildlife, zoo