Volunteering at the Fort Worth Zoo in MOLA

Today was my second day volunteering at the Fort Worth Zoo. Schools were all off for President’s Day, the weather was in the 70’s with a prediction of rain, but if it rained at all, it was just sprinkles. My first day last week was very quiet, it was cold and cloudy, so there were very few visitors.

I’m working in MOLA (Museum of Living Arts). I got there at 10 and the only people there were employees. It was so nice and tranquil, soothing music, low lighting and fish, reptiles and amphibians all inside their glass walled rooms and aquariums. I’m stationed at the reptile encounter desk. A keeper had “Sandy”, a 12 year old Trans Pecos Rat Snake. They come from western Texas. They rotate keepers and their animals every hour between 10-2 pm, so there are 4 different animals over the course of the day. They don’t want the animals out any longer than an hour each.

The next one was another Trans Pecos Rat Snake. This one was much smaller and he was about two years old. They can’t tell the sex of a snake externally, they can only tell with a probe. Snakes live about 30 years, that surprised me, I didn’t realize that they lived so long. I don’t know much about snakes, but I’m learning. I found out that snakes are not poisonous, they are venomous. Venoms toxins are only harmful by injection, poison is harmful upon ingestion and sometimes by touch. As long as someone does not have internal bleeding, venom can be swallowed with no adverse effects (although I wouldn’t want to try it). I also found out that snakes have many rows of teeth. Venomous snakes also have fangs. I also found out that there is a spot where snakes excrete their waste (aka go potty). There’s an opening at the base of their tail where it meets their body, called the cloaca (in English it means sewer) and that’s where everything comes out, including eggs. That’s also where a probe would go to check for the sex of the snake. When you look at a snake, you can’t really see a definition of where the snake body ends and where the tail begins, I guess I never realized they were separate. Snakes smell through their tongues, which I also thought was interesting and that’s why they stick their tongue out so often.

The next snake to come out was a Thai Bamboo Rat Snake, I think he was about 16, but I’m not sure. He was a beautiful sort of translucent looking snake. He is much smaller than the others. The next and last one was a Black Milk Snake, he was huge! I was surprised at how soft and even kind of squishy they all are and also surprised at how unafraid I was of them.

The zoo opened at 10, and it’s a little bit of a walk from admission to MOLA, so it took about a half hour for visitors to come to MOLA.   On the way to MOLA are the gorillas.   They’re always fun to watch, especially when little Gus is out. The flamingos and other animals are are also on the way, so people stop along the way and take their time.

A few visitors trickled in every so often, then at about 11am people were pouring in and it was pretty much a steady stream until 2, which is when they stop bringing animals out for the reptile experience.

The snakes just stay with the keepers, they wiggle in and out of their hands and visitors are allowed to very very gently pet them. The keepers are very gentle with them. This exhibit is a big hit, everyone, and I mean everyone who came was happy abd enjoying the experience. Two young girls came running up to me so excited because they really love snakes, we had a long talk about snakes.

This one was the Thai Bamboo Rat Snake.

It was interesting to see the reactions of people to snakes. A few really loved snakes, most were curious and wanted to touch them and then others that stood way back, a few couldn’t even look. One lady was with her family, her children were all petting the snake, so was her husband, but no way in the world would she do it. At first she was standing back, then she came a bit closer and started talking to me. She is afraid of snakes and thought they were slimy. When her d]family finished they all went to another section and then they came back to pet the snake again, this one was different, it was the big Black Milk Snake. Their mother came a bit closer to the stanchions this time and we were talking. She seemed somewhat intrigued but very unsure. Well after a lot of talking, she eventually tried it. She was amazed at how soft he was and seemed to be happy that she tried it and her family couldn’t stop talking about her petting the snake.

One person came up to me and thanked me for what I do, (I sometimes get that when I volunteer at the Dallas Zoo too), another came up and was sure that there was a dead turtle, I went over with her to look and (thankfully) the turtle moved. Then another family came up to me to tell me that they thought a lizard was stuck in its cage on the ceiling, that too turned out ok (phew!).

My main job at MOLA is crowd control… making sure that the line moves and telling people how to pet the snake (or lizard or whatever they have out). I’m working in MOLA now to get ready for Spring Break. It gets really busy and they need help with the lines of people who want to come to the Reptile Experience.  For now, it’s a good way to break in to get ready for their busy week.  The flow of people was steady, but not enough for big lines, so I was able to stay by the keepers. This was about the size of the longest line, so I didn’t have to worry about keeping the line moving. 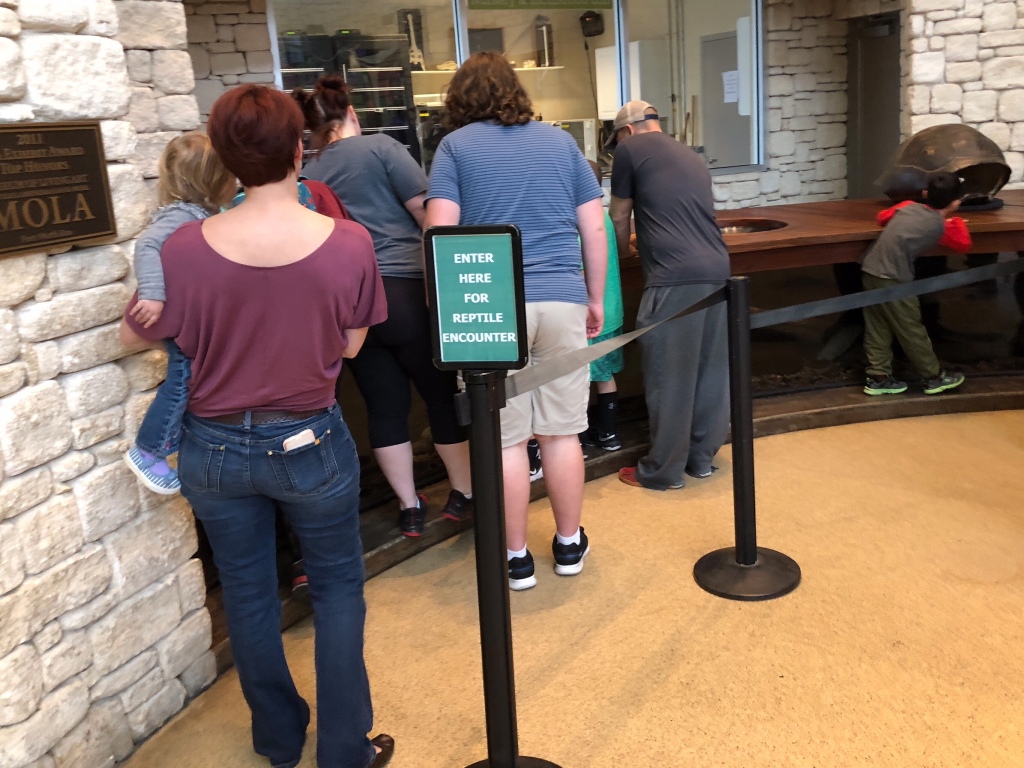 After Spring Break I will move onto other sections of the zoo by the elephants and giraffes. I must say though, that I am enjoying working in MOLA so much more than I ever thought I would.

The hippos, were out of the water and a keeper was spraying water at them, they seemed to love it. One hippo is Jonesy and the other is Daisy, but I don’t know yet who is who. I’ll find out when I start working over there.

Soon the hippos will be moved to their new habitat when the new savanna is finished. The savanna is coming along, there is a lot of construction going on now. The new changes will be very exciting and much needed!

I decided to run out to my car to get my good camera so I could get some good photos of the animals, so here are a few of them. 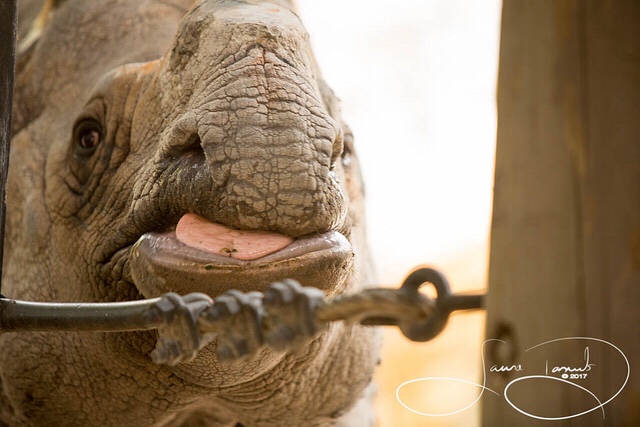 As it always is there, it was a great day at the zoo, and now it’s even more special because I’ve been waiting for over a year to hopefully work there… and now I’m a part of it. This is a brand new volunteer program for the zoo and I’m happy to be there from the beginning. It will be exciting to see all of the new changes at the zoo once the new savanna is completed.

Thank you for taking the time to read this,